‘Stranger Things 4’ Proves Show Is Just as Strong as Ever 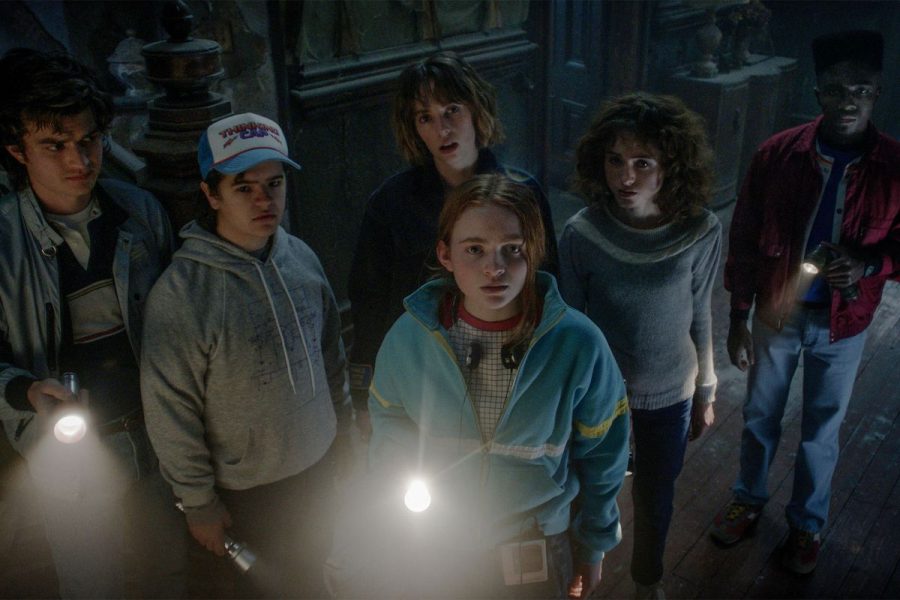 Characters surround Max Mayfield (Sadie Sink), whose struggle against villain Vecna was center in this season.

I have had Kate Bush stuck in my head for a month.

It’s one of the best scenes in television, ever: Max Mayfield, usually known as the sarcastic, hard-to-get-to-know friend, crying as she flees certain death at the hands of an interdimensional monster, her most beautiful memories of her friends fueling her determination – making a mad dash for her terrified friends as pieces of the Upside Down crash down around her and Bush’s “Running Up That Hill” plays in the background.

Gives a whole new meaning to “there is thunder in our hearts,” doesn’t it?

Max’s scene and the episode that centers around her – “Dear Billy,” episode four – is a major reason I consider season four to be one of Stranger Things’ best. And I really didn’t expect it to be that way.

Season three left us with many questions. There were a few things we knew after its release way back in 2019: Eleven was powerless, Billy Hargrove was dead, Chief Jim Hopper was dead (or something), the Byers family was moving, the Russians were coming more into play and had their very own demogorgon. And in the nearly three years since, we’ve had some questions answered: Hopper actually isn’t dead and instead in a Siberian prison, the Upside Down would make its return to the central plot after barely being seen or entered in season three, our new season four monster would be something entirely different from what we’d seen before – an anthropomorphic villain called Vecna (Jamie Campbell Bower).

But even with some questions answered in advance, and some worries eased, I was still deeply concerned for season four. I think a lot of people were. I mean, look at the central plot of the show: an interdimensional being kidnaps a kid into a different reality (the Upside Down), government experiments are exposed, children are put into mortal peril. They mostly managed to pull off two seasons after the impeccable first, but with a quickly aging central cast of mostly teenagers, it was hard to imagine they’d be able to carry on with the show much longer. As much as I loved it and wanted more.

But boy, did season four prove me wrong.

The number one way they did this was by pulling characters into the spotlight we really haven’t seen there yet. Max was one of them – coupled with a stunning performance by actress Sadie Sink. Max’s sometime-boyfriend, Lucas Sinclair (Caleb McLaughlin), was another – his internal struggle between his “freak” friends and the popular crowd was often frustrating and always humanizing. Will Byers (Noah Schnapp), who usually seems to be in danger but rarely gets his own real growth, received a plotline where he fell for best friend Mike Wheeler (Finn Wolfhard), something fans have suspected for years at this point. Other characters, such as Steve Harrington (Joe Keery), Robin Buckley (Maya Hawke), and Nancy Wheeler (Natalia Dyer), all found more depth in this season as well.

The number two reason this season wowed me was the new connections it drew between past events in the show. With a cast as massive as this one has become and ever-growing storylines, it would have been easy for the show to move to new plots and to leave earlier ones as resolved. Instead, much of the new information we get in season four actually explains what we’ve seen before. We learn why Eleven grew up alone in Hawkins Lab, where the Upside Down really comes from, and how it all fits together from the very beginning.

Halfway through the season, at the end of episode seven, it’s revealed that Vecna is actually 001, the oldest test subject, who looked after Eleven as an orderly until he killed most of the other children in the lab in 1979. And we learn that 001 was born Henry Creel (Raphael Luce), the tortured son of Victor Creel, a man once thought to have killed his entire family in 1950s Hawkins (turns out, it was Henry).

And, perhaps even better, all of this opens avenues upon avenues for crazy – but legitimate – fan theories. Fans have theorized that Vecna has been at play since season one, perhaps even being the one who took Will in the pilot episode, not the demogorgon as previously thought. They cite the fact that whatever takes Will uses telekinesis, makes the lights brighten instead of flicker, and is evaded by Will when he sings “Should I Stay Or Should I Go” by The Clash, like how “Running Up That Hill” saves Max.

Others have guessed that Vecna fathered Will or Eleven or both, perhaps becoming the reason they have their powers. Oh, and fans have theorized that Will has powers like Eleven’s – that’s why he could survive in the Upside Down so long in season one, see into it in season two, and later sense the Mind Flayer in season three. This certainly seems possible, as in the final episode of season four, Will mentions that he can still feel Vecna – that Vecna is what has been at play all along, and that he won’t stop until they’re all dead.

Releasing the season in two separate volumes helped contribute to the suspense as well. While the first seven episodes were released May 27, the final two weren’t released until July 1. And every episode was well over an hour long, with the ninth and final episode nearing two and a half hours.

With all this extra runtime, and a big, suspenseful gap between episodes, there’s been a lot more time for fans to discuss and break down the season – and for key scenes, characters, and, yes, music, to go viral.

That’s where Kate Bush comes in. I’m certainly not the only one with her song on repeat – “Running Up That Hill” has been in the Billboard Top 10 since Volume 1 was dropped, after having only gotten as high as #30 after its initial release in 1985. I’ve even heard the song play on 100.3, the local Colorado radio station for hot hits. Another Stranger Things-featured song, “Pass The Dutchie” by Musical Youth, hasn’t been charting but certainly has become popular on TikTok, as has Metallica’s “Master of Puppets,” which fan-favorite new character  Eddie Munson plays in the final episode. Eddie has become something of a phenomenon, as has “Byler,” the romance between Will and Mike, “Ronance,” the romance between Robin and Nancy, and Steve Harrington, who has his moment in the sun every time Stranger Things comes out with a new season. So the Netflix hit really has taken the world by storm.

Now, of course, there’s some valid criticism of this season. The characters are split into a minimum of four places at once, with storylines bouncing around – the main adult characters (Hopper, Joyce Byers, Murray Bauman) are in Russia bailing Hopper out, the rest of the Byers family, Mike, and new stoner character Argyle are in California trying to save Eleven from a lab in Nevada, and the rest of the gang is in Hawkins still – though, in typical Hawkins fashion, they’re usually split between different parts of the town or different dimensions altogether. This has meant that some characters and storylines get left behind. In Volume 1, the California gang got far less screen time after the first couple episodes. Erica Sinclair and Karen Wheeler were barely there despite leading roles for both actresses. Highly-anticipated new characters like Chrissy Cunningham and Vickie were well-liked but then either immediately killed off or ignored.

Some have questioned if the show has become too big, and if it’s time for a purge of characters. Even stars Noah Schnapp and Millie Bobby Brown said in an interview that it was time for some major character deaths, something the show has been reluctant to do – most deaths are of antagonists or minor and newly-introduced characters. The show even brought back Hopper after initially killing him. But in my opinion, this isn’t really a problem for the show. There’s still a balance between characters, and the growing universe matches the characters’ growing-up: as they get older, their world expands.

We suffered losses at the end of season four, characters both new and old, beloved and hated. It was devastating and somewhat expected. But some character endings were left open, and what will happen to Hawkins has yet to be explained. All we can do is wait for season five, and hope that the heroes can pull out one more victory.