The Sixth Week: How Russia is Retreating in Ukraine 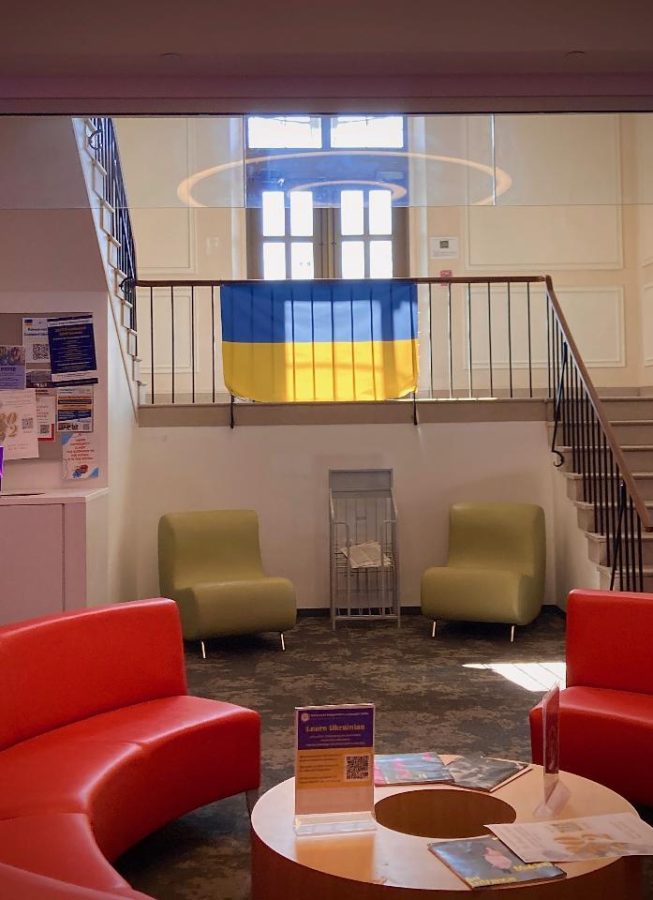 A Ukrainian flag hangs in a world language student center at Connecticut College in New London, Connecticut, on March 14. The college offered a program to learn Ukrainian on the table in the foreground. Since the war began, much of the world has erupted in support for Ukraine.

In the later days of March and early April, Russian forces were reported to be retreating from the Ukranian capital of Kyiv, cities of Chernihiv and Bucha, as well as neighboring suburbs, leaving tanks and death in their wake but also signaling a major turning point in the war. The collapse of the attacks on Kyiv brought a well-earned break for Ukrainian forces, but in other areas the attack continued to be unrelenting.

“The initial Russian operation was a failure and one of its central goals — the capture of Kyiv — proved unobtainable for Russian forces,” Micheal Kofman, the director of Russian studies at C.N.A., a nonprofit research and analysis organization located in Arlington, VA, said in a New York Times interview.

Although there is no definite reason for the sudden retreat, investigators claim it may be related to the sanctions Russia has been facing since the beginning of the invasion in February. Widespread boycotting of Russian goods, especially natural gas, has been accepted all over the world, and the impact has begun to hurt Russia.

Without the financial support of the nearly $850 million in gas exports from Europe per day that would finance warfare plans, many investigative figures believe the Russians can’t sustain their attacks on Kyiv and must focus on only one part of Ukraine.

While retreating from focus areas around Kyiv may appear a positive thing after a glance, the aftermath of intense fighting is now being found as troops leave the suburbs of Bucha and Cherniviv. As Russian soliders leave the suburbs, the effects of war are found in dead bodies and bombed buildings throughout residential neighborhoods.

“Hundreds of dead people. Peaceful people tortured, and shot dead. Dead bodies on the streets. Mined land,” Ukrainian President Volodymyr Zelenskyy said in a speech on April 2. “Even the bodies of those who were killed were mined.”

In addition to the recent discoveries of massacre, Russian forces began to target the second most targeted city in Ukraine, Kharkiv. Attacks began late on April 5, with air strikes targeting regions around Kharkiv such as Donetsk and Luhansk. Civilians began to flee the town of Rubizhine in the Luhansk region under heavy gunfire — the town under 60% control by the Russian military, according to governor Serhiy Haidai.

“Evacuations are taking place under the roar of enemy guns.” Haidai said in a Facebook post on April 6. “The cities of the Luhansk region are in ruins. Thousands of residents have not yet left.”

As the world began to see what had happened to the people of Bucha, government officials pushed for more sanctions, such as banning Russian coal exports. In addition to an increase in sanctions, Italy and Spain both expelled Russian diplomats, claiming they were a threat to security. Both Britain’s Prime Minister Boris Johnson and United States President Joe Biden called Vladimir Putin a war criminal, urging charges to be pressed against the Russian president.

“The truth of the matter — we saw it happen in Bucha,” President Biden said. “This warrants it, [Putin] is a war criminal.”

Under the recent threat of being charged with war crimes, Russian officials deny that the massacre in Bucha and other suburbs was their doing. Russia claims that the killing of Ukranians happened after they left the area, not during. But as troops pulled out of the areas that suffered the worst casualties, aerial analysis showed that bodies were in roads and neighborhoods up to three weeks before the retreat, refuting Russia’s claim.

The European Union is discussing banning use of Russian oil and coal exports, although the discussions are not expected to end until the end of the week due to Germany and Hungary’s dissent of losing that majority of their country’s fuel resources. Russian attacks are expected to continue in the region of Kharkiv although it is unclear where the targets will be or how long they’ll last.