Is There Hope On the Horizon For the 2022 Colorado Rockies? 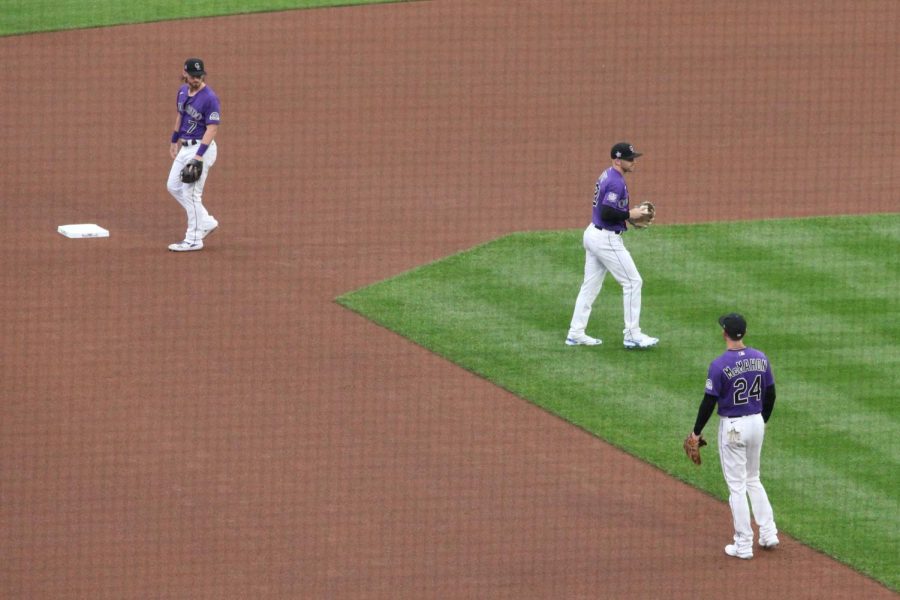 Rockies infielders Brendan Rodgers, Trevor Story, and Ryan McMahon warm up before a home game against the Chicago Cubs on Aug. 3, 2021. The Rockies failed to re-sign Story in the offseason, but did re-sign McMahon and kept Rodgers.

Baseball season is officially on. Of course, for the dysfunctional Colorado Rockies, that could very well mean months on end of embarrassing losses. But there’s a possibility that it’s not as bad as it looks for the Rockies in 2022.

If you’re a diehard Rockies fan, you’ve gotten used to the endless supply of annoying and outrageous decisions by Colorado’s front office. If you’ve been following the team for just a few years at this point, you’ve experienced the disappointing and seemingly pointless losses of Troy Tulowitzki, Nolan Arenado, Carlos Gonzalez, DJ LeMahieu – the list goes on and on. And you’ve watched as the team’s pitching staff sank very quickly into the ground (not that it was great to begin with).

So, if you’ve been following the Rockies, you probably weren’t surprised when the team chose not to re-sign star shortstop Trevor Story in the offseason. Most of us saw that coming from a mile away. You might not have been surprised by the loss of Jon Gray, one of the Rockies’ best pitchers and a player who actually wanted to stay with the team, unlike many of the other players I’ve mentioned.

You might not have been surprised by these decisions, but believe it or not, the loss of these stellar players might not have doomed the Rockies in 2022. Because unlike almost every season since 2015, the Rockies actually made beneficial moves for themselves this offseason.

Though delayed by conflicts between the MLB and the MLBPA (MLB Players’ Association – the players’ labor union), the Rockies flung themselves into the free agent and trade market. With the expected loss of Story and the pre-union battle loss of Gray, the Rockies had already freed up space in their limited payroll for newer, better faces. It just remained to be seen whose faces those would be.

As it turns out, the Rockies snagged themselves a good one – 30-year-old Kris Bryant. Former Chicago Cub, then San Francisco Giant, Bryant is a three-time All-Star (including last season) and has a career batting average of .278 and WAR (wins above replacement – used to determine a player’s value to a team) of 28.8 – pretty impressive stats, and above what the Rockies can usually afford.

I heard rumors that the Rockies and Bryant were in talks in early March. I did not believe, for a second, that those would go anywhere. Maybe it was just horrible pessimism, but in a season where the team was already losing our number one star (Story) and probably would not make the newly expanded playoffs, I was fairly sure that a star like Bryant was not going to want to sign in Denver. Plus, Colorado is a small-market team – they don’t have money to throw at Hall of Fame material.

But lo and behold, Bryant and the Rockies agreed to a 7-year contract. Bryant would be playing outfield, despite a history at third base. The decision, made just six days after the MLB and MLBPA agreed to terms, was the first signal to many Rockies fans that maybe, just maybe, the Rockies were on a better track than usual.

The contract with Bryant set off a small chain of similarly reassuring choices by the front office. The team re-signed emerging superstar infielder Ryan McMahon for another six years on March 21 and traded for Toronto Blue Jays outfielder and slugger Randal Grichuk on March 24. They also signed Boston Red Sox infielder José Iglesias in a one-year contract March 16, though that addition pales in comparison to other deals made. They managed to keep many of the team’s younger, more versatile stars, some of whom have yet to prove themselves but still could – Sam Hilliard, Garrett Hampson, Brendan Rodgers, Connor Joe. They kept fan-favorite veterans Elías Díaz, Charlie Blackmon, and C.J. Cron. And in an effort to improve the ever-lagging bullpen, the Rockies managed to sign multiple new pitchers and held onto almost all of the stars.

See? It actually doesn’t look too bad for the Rockies.

Now, of course, it’s not all good news. The Rockies are again going into a season without Scott Oberg, one of their better bullpen pitchers in a while, due to recurring health issues that could very well end his career. Trading for Grichuk also meant losing Raimel Tapia, fan-favorite outfielder. They don’t have Story (now on the Red Sox) or Gray (now on the Texas Rangers). And, of course, the team is still reeling from the loss of third baseman Nolan Arenado in 2020, who left the team after long-standing conflicts with Rockies management and now plays with the St. Louis Cardinals.

It also doesn’t help that they lost a game already. But it was against the Los Angeles Dodgers – I mean, what did you expect?

But, if I’m being honest, I haven’t been this optimistic about the Rockies’ chances in a very, very long time. I don’t expect a World Series. I don’t expect a division win – with the California teams they’re up against, the Rockies won’t finish ahead of anyone except the Arizona Diamondbacks. I don’t even expect playoffs. But maybe, just maybe, Colorado won’t be bottom five in the NL this year. Maybe, just maybe, new management and big offseason moves have put the Rockies on a path toward (eventual) greatness.