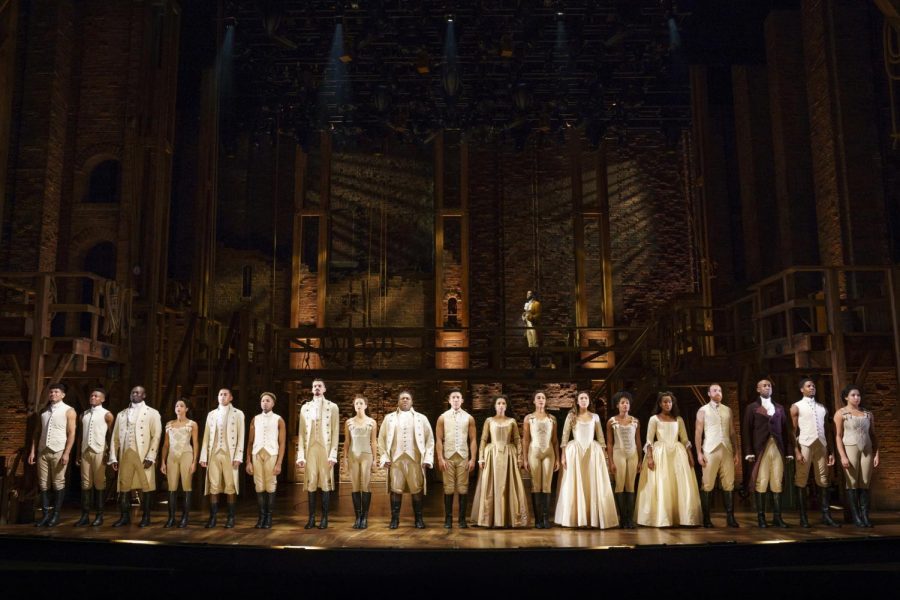 The ensemble of 'Hamilton' performs during the musical. The 'And Peggy' North American tour will be in Denver from Feb. 16 to March 27.

That’s how long the Denver Center for the Performing Arts was closed during the COVID-19 pandemic.

As of October, Denver Center for the Performing Arts (DCPA) shows have been back to normal – almost. There are still mask mandates in place, and all guests must be fully vaccinated. But the shows are on, and theaters are active again.

For thousands of Denverites, their big return to the theater is Hamilton, the Tony-winning revolutionary war musical that swept the world. And it’s not just audience members that are re-entering theaters for the first time. Many stage actors are returning to theaters for the first time since March 2020, and the feelings that come with that are mixed.

Seven years after its original Broadway release, Hamilton tickets have proven ever elusive for many. After the DCPA canceled a mid-2020 run of the musical due to COVID, many Colorado theatergoers were left wondering if they’d ever actually get to see it. But Hamilton finally returned to Denver Feb. 16 and will run until March 27. For many Hamilton lovers, this run offers an opportunity to see the show in person for the first time ever.

“I think my favorite part was seeing it in person and seeing how it actually works, because I’ve been watching it on TV, and then in person, it’s so much better,” said junior Sam Pemberton, who saw Hamilton on Feb. 17, the seven-year anniversary of the show’s off-Broadway debut. Even after seeing the movie version on Disney+, released July 2020, Pemberton said that she preferred the in-person performance. “I think the audience made it better. When they were having fun, I was having fun. I think that’s what made it 100 times better being in person.”

Ashley De La Rosa, who plays Peggy Schuyler and Maria Reynolds in the national Hamilton (And Peggy) tour, told the USJ that performing in Denver was special for her, too.

“Denver is one of my favorite cities to perform in. I actually toured here a few years ago with RENT and I had such fond memories, so coming back this time with Hamilton has been a blast,” De La Rosa said via email. “When it comes to touring, my favorite part is getting to explore the cities I’m in, and Denver definitely has a lot to offer, so it’s been a really pleasant experience. Every time I come here, I’m like ‘dang…should I just move to Denver?’ Who knows, you might see me here in 10 years.”

Pemberton has participated in school musicals and performances in the past. For her, this has made seeing musicals in-person all the more impactful.

Pemberton said that seeing stage actors for the first time in multiple years was “fulfilling.” But for some cast members, the return to the stage is a bit more bittersweet. De La Rosa said that the “sobering” reality of COVID is still very much at the forefront of actors’ minds.

“I can’t come back and say that performing for crowds of people again fills me with joy because I know that the people on our stage were also deeply affected and continue to be affected by COVID just like the people watching us are,” De La Rosa said.

When the COVID-19 pandemic hit, nearly all stage actors were left without jobs. De La Rosa explained that “because of negligence and recklessness, our jobs were the first to go and the last to come back.”

“Like many other industries, we were left to the wayside as we lost our jobs, and our healthcare benefits were cut,” she said. “Unlike many of those industries that suffered, though, theater and the arts received less help from the government, and many of us had to completely find new sources of income because ‘working from home’ isn’t possible in theater.”

Cutting arts money or neglecting to fund the arts at all is a general trend in the U.S., De La Rosa remarked. She also said that as people were no longer able to go to the theater, many tended to forget the actors that were suffering.

“As people sat in their homes to quarantine and turned to things like Netflix to pass the time and make them feel good, the disconnect between what they were watching and how the people who created what they were watching were affected was vast,” De La Rosa said. “We’re not just singing and dancing props, and I hope our audiences can start to see us as fully formed beings rather than tools for entertainment. While I still love performing, I’m much more precious and, subsequently, more vocal about my needs as a person rather than as just an actor.”

Many view Hamilton as an all-the-more powerful and important show in light of today’s political and racial divisions. Initially created by Lin-Manuel Miranda in 2009 and debuted on Broadway in 2015, Hamilton contains mostly hip-hop influence and features a cast made up almost entirely of people of color. According to Miranda, the musical is partly meant as a retelling of history from a perspective that can often be forgotten, but represents the story of so many Americans. Miranda told the New York Times in 2015 that ‘‘the show reflects what America looks like now.”

Pemberton said that the diversity of the cast was a huge reason she views the show as important. “They’re [the cast] not predominantly white,” she said. “They’re a mix of Hispanic people, African American [people], which I think is good because it represents that America was – is – all of us, not just Caucasians; everyone.”

De La Rosa reflected something similar. “Hamilton is the telling of America’s forefathers by the people of today and I feel like that’s what makes the show timeless,” she said. “On a demographic note, I believe that this show is important because of the vast array of different colors, sizes, ages, and shapes on our stage which wasn’t always the case in theater.”

On another note, though, De La Rosa said that she can relate many of the stories told in Hamilton to events that people are living through today, and that’s a big piece of why Hamilton is so popular, and so relevant – and why it will continue to be.

“They say ‘history repeats itself,’ and I often find such poignant things in our show that I can relate to present day politics, and I know the audience feels it too,” De La Rosa said. “For example, the entirety of Act I is set on the landscape of a nation that is trying to free itself from colonial rule and fight off its oppressors (Great Britain) which is still so relevant even today as we are seeing with the Russian invasion of Ukraine. Politically, the show will continue to be important in today’s world, tomorrow’s world, and beyond, because the political sphere will always be about power and those who have it versus those who want it.”