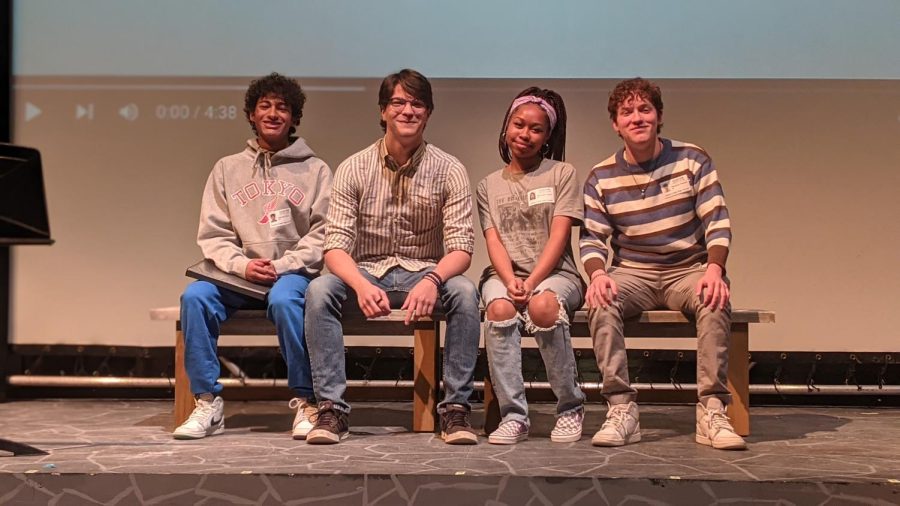 A 2022 DCPA playwriting competition ended in victory for Creek Senior Riccardo D'Urso, whose play was staged in the Fine Arts theater on March 7.

Creek Senior Riccardo D’Urso’s play They Stole The Moon was staged in the Fine Arts theater on Monday during the 7th period. The Denver Center for Performing Arts (DCPA) hosted a playwriting competition for young writers in Colorado. After reading and working on D’Urso’s play, it was selected as one of the competition’s top three finalists.

They Stole The Moon was a classic love story about two young friends, Jay (Gabe Dave) and Kate (Summer Jones), both of whom D’Urso selected to act for the staging. He also cast a narrator, played by Ben Feldman. The play is mainly based on D’Urso’s personal experiences and was inspired by his struggles with mental health.

“I personally have had mental health struggles for a while, but I just recently learned how to identify and talk about them,” D’Urso said in a previous interview for the USJ. “After I got better I just felt I should finally say goodbye to those parts of myself by writing a play for them.”

DCPA Executive Director of Education and Community Engagement Allison Watrous explained during a Q&A session after the staging that D’Urso’s play was selected primarily because of its dialogue, which ranges from the conversation about penguins to exclamations about the moon being stolen.

“The dialogue is just [a] powerhouse,” Watrous said.