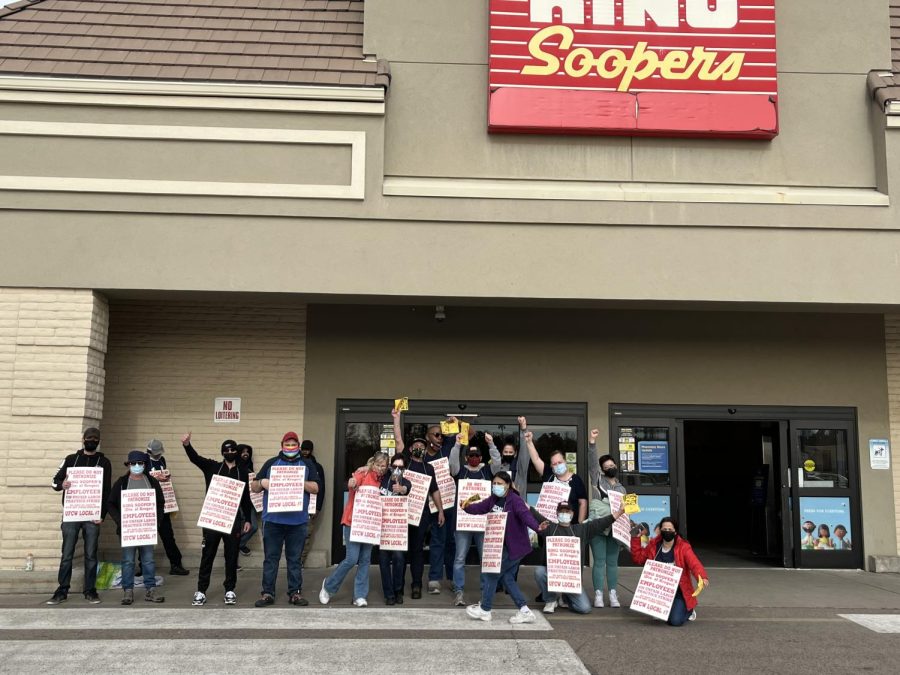 Strikers at the King Soopers in Belleview Square stand outside the store holding up signs and passing pamphlets to passing customers. The workers began striking on Wednesday, Jan. 12 after King Soopers refused to comply with the union’s demands for better pay, health, and safety conditions. Because of this, many Creek students have begun avoiding shopping at King Soopers in support of the strikers’ cause.

King Soopers workers across the Denver area began striking Wednesday, Jan. 12 for better wages and improved working conditions. Employees lined up in front of stores, wearing signs around their necks and passing out pamphlets. Passing cars honked in support of the strikers while the strikers continued to shout and encourage customers to shop elsewhere.

The United Food & Commercial Workers Union, which represents over 8,000 King Soopers employees in over 70 stores across the metro area, made a decision to strike after various legal disputes. The strikes began after the union filed a lawsuit against King Soopers for violating various parts of their contract, including hiring temporary workers while the contract was still in effect.

In addition, the union is working to ratify a new contract which would give workers higher wages, something that many strikers believe is necessary.

“We can’t afford to live on what [King Soopers] is paying us,” King Soopers front end supervisor Kathy Geary said. “We make over a million dollars in this store, probably in just over a couple of days over Christmas. We should be being paid a better living wage than what they are offering.”

As the cost of living continues to increase due to inflation, workers believe that they deserve to get paid more. Some workers are barely or unable to make ends meet with their current wages.

“People who have worked here a very long time aren’t being paid very much,” King Soopers head clerk Dennis Reinhard said. “It wouldn’t even cover the cost of inflation.”

Additionally, workers have expressed their concerns over health and safety in the workplace.

“I’m still scared,” Geary said. “Every customer coming and going, we are at risk of COVID. We’re at risk of the [shooting] that happened in Boulder. That’s scary, to walk into my job and not know what [could] happen. We need safety, we need wages, and we need to be treated fair. Our [current contract] just doesn’t hit all the bullet points.”

The strike is estimated to last around three weeks. However, depending on how King Soopers reacts, the strike could continue even longer.

“Nobody knows how long this will last,” Geary said. “If nothing changes, I will [still] be here. We are ready for whatever it takes.”

Many Creek students have expressed their support of the strikers. Some students have chosen to avoid shopping and eating lunch at King Soopers. Others have shown support for these workers over social media, encouraging others not to shop at King Soopers for the time being.

“Creek students are a huge part of [this] community and have the ability to help these [workers],” said junior Eric Zhang, a representative of Creek’s Young Democratic Socialists of America.

The club has been actively encouraging the Creek student body to avoid shopping at King Soopers on Instagram.

“By choosing not to buy from them we can help pressure them to give in to worker demands,” Zhang said.

Many King Soopers employees at Belleview Square believe that Creek students can make a significant contribution to their cause.

“We have provided [students] with lunches from our delis, sushis from our sushi department, we have your items freshly stocked, sodas, drinks, candies, the whole nine yards,” King Soopers head clerk Dennis Reinhard said. “Coming into the store while we are in the midst of a strike is kind of a big slap in the face. We cover when you go to school, you should cover us while we’re on strike.”