Jan. 6 Was Merely the Beginning 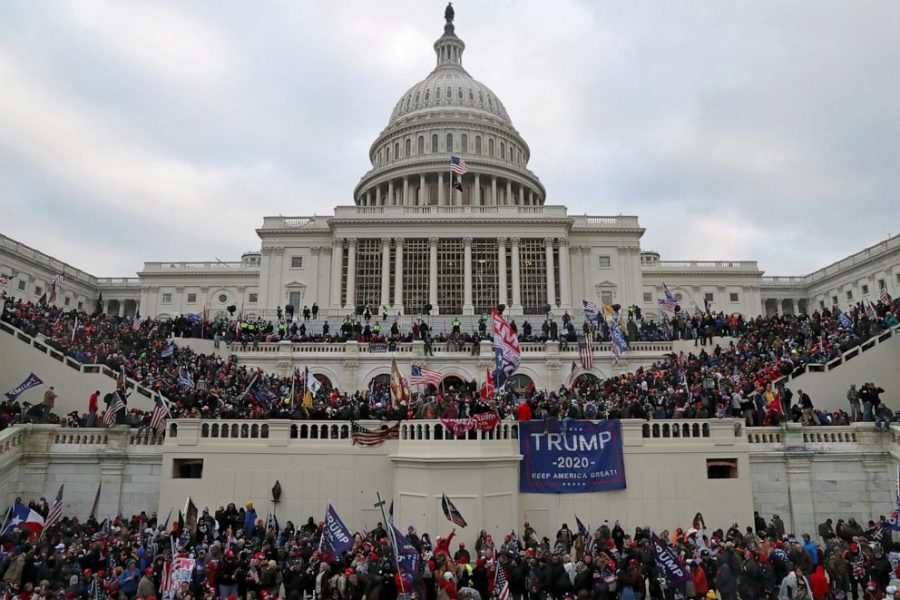 Right-wing extremists stand near the United States Capitol on Jan. 6, 2021, showing the spirit of sedition with flags and gallows that I believe aptly represent what happened to the future of the country that day one year ago.

When thousands of far-right extremists stormed the United States Capitol on Jan. 6, 2021, the state of the country looked awfully grim. But I was left feeling that the insurrection that rocked the foundations of democracy in the country was only the beginning. The next attempt to overtake the government will not rely on the destruction of historic property and blatant violence, but the collapse of democracy altogether.

Shouts of “Stop the steal!” surrounded the grounds of the Capitol, but the phrase aimed at halting the count of ballots on Jan. 6 will never again be useful. The American vote will have little impact on the results of the 2024 election. Even today, word of restricting the vote strikes democracy with fatal blows. Millions of ballots will be hidden or trashed to produce the average extremist’s desired outcome of the 2024 election: to reinstate former President Donald J. Trump.

According to the Brennan Center for Justice, over 440 bills that restrict voting access have been introduced in 49 states across the 2021 legislative session. Between January 2021 and early December, around 20 states have passed 34 laws further restricting voting opportunities. These laws have an assortment of ways to slow the vote, including 2021’s new trend of allowing partisan legislatures to interfere, or reject results entirely, with respect to voting or elective processes.

This current battle over voting rights – the debate over who oversees the vote, who can vote, how to count the vote – will bring nothing but more fighting to the once pristine field of democracy. During the pandemic-impacted 2020 election, many voters cast their ballots by mail, reaching 43% of the vote, according to the Census Bureau. 26% cast their ballots early, and only a mere 21% of the voting population cast their vote on election day.

This wave of new voter habits cast worry over the Republican party due to the fact that mail-in votes trended more liberal in demographics. Republican lawmakers sprung to action, basing their calls for a reworked (and restrictive) voting system by invoking a communal distrust in public elections. Right-wing officials have recently been destroying the country’s voting system by tightening the rules on voting by mail, lowering the number of mail-in drop-boxes, and giving Republican-controlled legislatures higher control over voting regulations.

These new voting restrictions are not adequately being taken seriously by members of the Democratic party, even as new conditions are being passed to hurt citizens’ voting abilities. Democrats take a passive look at the issues facing the country they claim to be protecting, but their attention strays. This is a mistake that will hurt the face of ‘American Democracy’ for years to come.

“The democratic emergency is already here,” UC Irvine law and political science professor Richard L. Hansen said in an interview for The Atlantic. “We face a serious risk that American Democracy as we know it will come to an end in 2024.”

Hansen speaks directly to the opinion that I, along with many others looking at the state of our country, hold. The fall of democracy will come not with violence and injury, but with the deviance from the structures that hold our nation together.

Recently I have been studying the Civil War, the bloodiest war in American history. The country is not in such poor standing (or at least I hope not) to split into two and begin battling, but in writing this, I began to think about how the basis of a political fight is not centered around a field like Gettysburg, but actually numerous law offices and courts. This is one of the major reasons that I believe the next attack upon our democracy will not be based on physical fighting, but a politically-wagered one, filled with complicated papers and partisan arguments.

Even so, looking back at the insurrection that faced the Capitol one year ago, there is an undeniable feeling of disappointment in the state of things. I remember watching the news that day, and thinking how horrible it was that thousands of extreme citizens of my own country felt the need, and were proud, to injure law enforcement officers, break into a hallowed building, and forever damage the way nearly 330 million Americans view America.

January 6 was never going to be the way the democracy in our country came to an end. I look at our country, shaken by a pandemic with seemingly countless variant diseases and political turbulence that cannot be matched by anything I’ve seen in my lifetime, and shake my head. To the United States of America: pull yourself together.