‘Holiday in the Wild’: Nothing More Than Some Cute Elephants 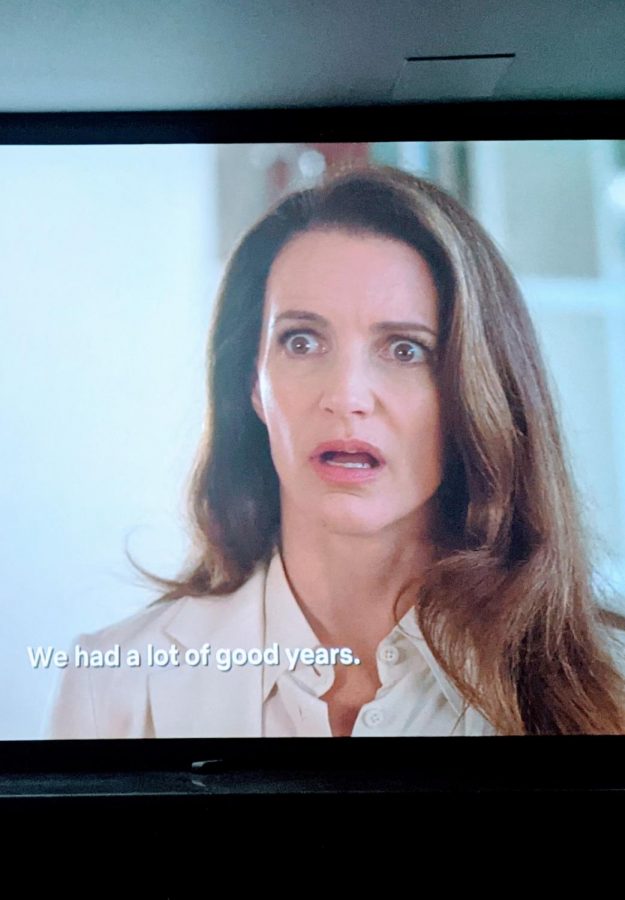 Kate’s (Kristin Davis) face as her husband announces that he’s leaving her accurately represents my expression as I was watching this cringe-filled movie.

MCPA’s 2019 Christmas film Holiday in the Wild is unlike most holiday movies you may have watched. The movie tells the story of recently divorced Kate Conrad (Kristin Davis) and her journey as she vacations in Zambia over the Christmas season. Kate’s life is changed for the better when she meets Derek Hollistan (Rob Lowe) as he is giving her a plane ride to her resort. After finding a stranded elephant in the wild, Derek and Kate begin their adventure together to care for him.

Despite the film’s uncanny plotline, it does introduce a pleasant romance storyline to follow. As a relationship between Kate and Derek buds, an interruption from Derek’s supposed girlfriend creates tension between the two.

Throughout the film, the plotline feels hollow and basic, even when it comes to involving elephants in a Christmas movie. Generally, I try to avoid these cheesy Christmas movies where the city girl discovers her calling in a place she’d never dream of going and falls in love with the rural guy. Holiday in the Wild is definitely a movie you should shy away from if you don’t like that ever-classic plotline like myself.

The elephants may have been the only good thing in the movie, even if they were quite random in the preface for a Christmas movie. Overall, the elephants were happy, adorable, and seemed to have more personality than the actual human characters. Elephant-wise, they don’t make me cringe as much as Derek does when he says that “elephants read your soul.” They do help to sell the point of why Kate left her pristine New York life; if I had a baby elephant to take care of I probably would move as well.

Kate may find happiness in Zambia, but it plays right into the hands of almost every Christmas movie ever. While Holiday in the Wild may not be the worst cliche Christmas movie, it certainly matches the cardboard cutout that is expected of a ‘Christmas Classic’. And even as a Christmas movie, it takes three months just to hit the holiday season from the time the movie begins.

In Holiday in the Wild, you have the instant connection between the city girl and the outdoor guy—where they magically have a lot in common. The movie checks all the boxes, including the obligatory scene with the shirtless love interest. Derek wins bonus cliche points for being fresh out of the shower as well.

Derek is the perfect cheesy, hollow, and sarcastic character. He fits the plotline and aptly portrays the kindhearted man he’s supposed to be once he lets his guard down. And of course, he paints. He even paints a portrait of Kate, which she hangs right across from her bed. Although if I were her, I definitely wouldn’t want a painting hanging where I’d wake up and see myself smiling back at me first thing in the morning.

Every cliche needs the ever-prominent relationship conflict, and the tension created by Derek’s girlfriend Leslie Van Der Mere-Jones (Hayley Owens) does just that. It honestly seems like Leslie was introduced to the movie solely to create a confusing love triangle and then disappear again. Leslie is part of the foundation that funds the sanctuary, and when she finds out about Derek’s interest in Kate she makes the drastic decision to cut funding. This plunges the sanctuary into turmoil just as Kate boards her plane back home to New York. Again, every cliche movie needs the big city girl.

When Kate returns home, she comes to the conclusion that her perfect life there is not as good as it seemed. She tires of being one of the ‘ladies who lunch,’ and asks her friends (who are all ridiculously rich) to write checks to the sanctuary after Leslie had cut the funding. Kate then packs up her life, sells her beautiful New York City apartment, and moves back to Africa for some elephants and Derek. She plays right into the classic plotline where the experiences of the holiday help the character to find their true self.

In just ninety minutes you can get just about every cliche you need for a cheesy Christmas movie. You have the star-crossed lovers, the interrupting girlfriend, random amounts of elephants, and a city girl realizing that maybe she isn’t a shallow lunching lady after all. The film is perfect for elephant lovers, but if you don’t want the classic cliche Christmas movie, I suggest you stay clear of this one.