Creek Junior linebacker and back up quarterback Marté Russell reflects upon his relationship with his father, his athletic journey, and the obstacles he has faced to get where he is. 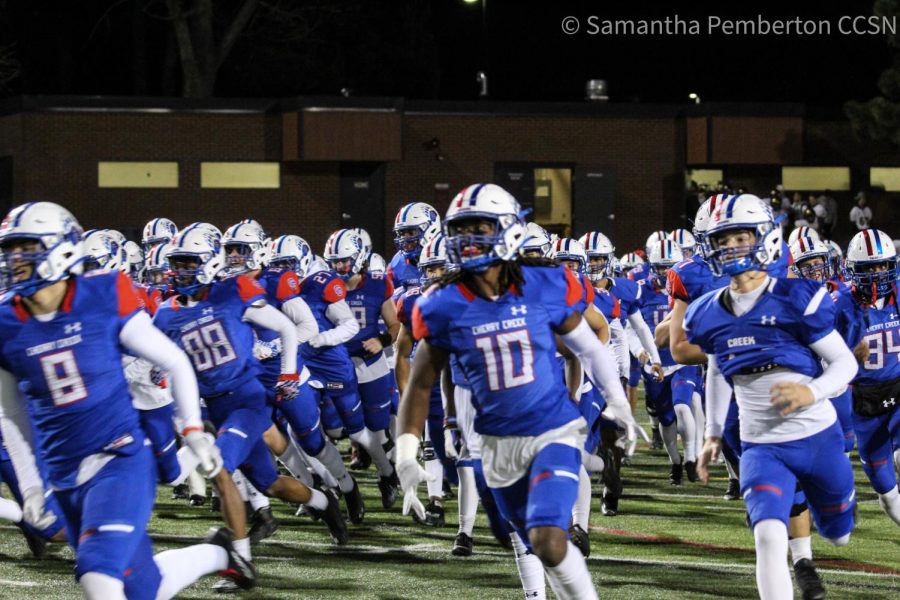 Marté Russell, a Cherry Creek Football linebacker and back-up quarterback, began playing flag football when he was 4, then continued to tackle football when he was only 6. Russell and his father bond over football, which is something that brings them close together. His father has been there to support and encourage Russell’s football career.

“He leads me to do more and more every day and push myself to be the greatest young man I could be,” Russell said.

When not playing football, the two enjoy relaxing days of fishing to get away from the stress of everyday life. Russell said that fishing and the patience that comes with it helps him with football.

“It’s actually great for football. You have to learn to be patient, let things flow slowly, slow the game down in your head, and just be calm,” Russell said.

During his freshman year, Russell suffered from a back injury. He jumped in the air and as he was reaching for the football with other teammates, he back landed on his teammate’s face mask.

‘’I was playing middle linebacker at that time. Ball flew up in the air, we all jumped for the ball and my back landed on Logan Bradley’s facemask,’’ Russell said.

Russell fractured the L4 and L5 vertebrae in his spine, considered a lower lumbar fracture, and was in a full back brace with eight months of physical therapy. Russell came back healthy his sophomore season, leading the junior varsity team to an undefeated season and playing back-up quarterback for varsity quarterback Julian Hammond.

Over the summer, Russell traveled to Alabama where he fished and visited the University of Alabama, where he hopes to attend after high school.

“My dream school is the University of Alabama,” he said.

Russell’s future plans include playing football at a D1 college. He also hopes to attend med school and make his living as an orthopedic surgeon. When Russell was hurt with his back injury, an orthopedic surgeon showed him open surgeries and pictures, inspiring his future goals.

Russell is honored to be part of the Cherry Creek football program and is very close with his teammates.

“It’s all a brotherhood,” Russell said. “We all bond together and do the job that needs to be done on the field.”

Some of Russell’s teammates have grown up with him and watched him grow as a football player. They recognize him as a leader on the field and a good friend off the field.

“He’s like a brother,” Sophomore Keyon Johnston said. “I’ve known him since I was a baby and he’s an overall good teammate.”

Russell alternates between quarterback and linebacker, and he threw a touchdown as well as scored a touchdown during Creek’s game against Eaglecrest.

As the regular season ends, Russell and the rest of his teammates hope for success in the playoffs and to win the State Championship for the third year in a row.