The Divisions Between Us

Politics seep into the 2021 CCSD School Board Election 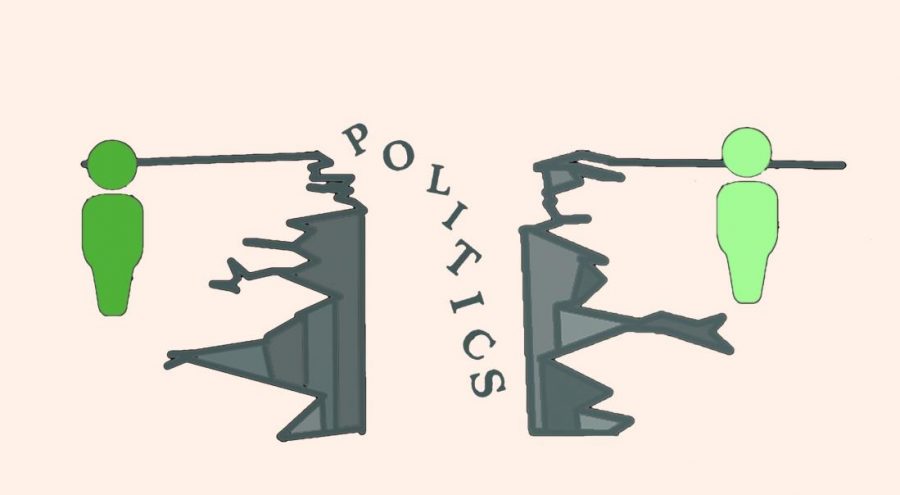 Politics have seeped into the school board election this year, potentially creating an irreparable divide.

There has never been a school board election quite like this one. None of the past or present board members recall a time when politics had been so heavily involved in the fate of children’s education.

“It has all suddenly become…’because you think differently than me, you’re against me,’…[and] nobody’s willing to budge,” candidate Jennifer Gibbons said. Her partner-candidate in the campaign, Bill Leach, agreed.

“There are some different opinions on what the main issues are with the district and how to solve those,” Leach said.

Of all the interviews conducted, of all the differing opinions and viewpoints, the one thing that remained unchanged was both sides’ desire to make the district a valuable place for their child and other students. That idea is not getting translated from side to side.

“Everybody agreed to only run on merits – not on what is negative or what you feel is negative about someone else,” candidate Kelly Bates said, “[but] it has become a dirty campaign.”

Current School Board President Karen Fisher said that 111 people signed up to speak at this year’s board meetings. There had never been this many people sign up to speak. According to Fisher, about 90% of those people debated political topics such as the Critical Race Theory (CRT) and mask mandates. Fisher also emphasized that this was not something specific to our district.

Candidate Kristin Allan hypothesized that the divides in society have become so great, that our polarization is seeping down to the school level.

And she’s not wrong. Our country is the most politically polarized it has ever been. According to 2019 political science research, there’s a 20% increase in reports of polarization since the turn of the 21st century.

“We as a nation are becoming so polarized, and things like education…have become so politicized; there are many groups out there that are putting politics in front of kids,” Allan said. “And now with the school board elections rolling out at this exact time, the board races – which are supposed to be non-partisan – [are] now having to deal with all of these political issues, rather than focusing on how we figure out how we serve every kid every day.”

Two politically active groups, No Left Turn in Education and FEC United, started making appearances at Board of Education meetings.

The FEC United website states that “every level of our education system has been compromised with illogical and immoral propaganda,” and one pillar belief is that “parents have lost their ability to choose what is right for their families and children as their rights are stripped away and drowned out.”

Last year during remote learning, parents had the opportunity to live in the classroom with their kids. Allan believes this has given parents the chance to formulate opinions regarding what was being taught in their child’s classroom, while in normal years, kids are at school, and parents aren’t part of day-to-day classes.

“Now, it’s [their child’s education] their [the parent’s] responsibility,” Allan said. “I think it’s a combination of the awareness being raised, which is a good thing, except that there are misunderstandings that come along with what was being taught and why.”

According to the Colorado Times Reporter, FEC United sent out an email to supporters on June 22 encouraging parents to “rally and fight” against CRT at school board meetings. The email stated “this week, three of Colorado’s school districts have board meetings, which means an opportunity for parents to speak out.” It then directed parents to the Cherry Creek Board of Education meeting.

During that June board meeting, armed members of FEC United known as the United American Defense Force (UADF) lined up outside the meeting and made their presence known to the inside members of the school board.

“Politics has wormed its way into almost every aspect of our lives…so it’s not surprising that all the non-partisan elections…often have a political protest to those elections,” Leach said.

Some candidates were unclear how representative these political groups were for students in our district.

“I don’t know where this group is coming from,” Bates said. “I’m hoping it’s a small group, and that our constituents know what’s best for our students.”

Allan was worried about this as well.

“[Political groups have] begun chipping away at education, which is the foundation of our democracy and our thriving local economy…We must put our children first and make decisions based on science, data, and local citizen input, not on fear or any extremist political ideology,” Allan said.

Fisher said that she understands that parents are concerned about their kids; however, she doesn’t agree with the claims of groups like FEC United or No Left Turn in Education

“If we’re really teaching Social Studies in a way that is excluding people, then I don’t want to do this job anymore. If by making kids wear masks, we’re somehow ignoring their mental health, I don’t want to be the school board president anymore. If we’re excluding white kids, or immigrants, or anybody from a different field…then I quit,” Fisher said.

Recently, FEC United endorsed candidate Jennifer Gibbons who said in a Q&A forum, “I have no idea what that is, and I didn’t know they endorsed me.”

She later told the USJ that she filled out a survey they emailed her, but she had been filling out more surveys than she could count. Leach said that their main goals for the school board did not include politics.

And then again it all comes back to the idea of what’s best for our children.

“Disagreement can be very productive, but outright conflict and ability to resolve anything…is not helpful for you guys,” past Creek PTCO President Andrea Davoll said.

Candidate Schumé Navarro was another who sympathized.

“We are a culture of collaboration. We understand that we are Better Together,” Navarro said on her website.

And all candidates understand what’s at stake: the legacy and future of our children’s education.

“Ultimately, there’s a common goal of just believing in students and believing that things can work best for them,” candidate Jason Lester said.

Allan agreed with this idea, and recognized how important this particular election was.

“I’m concerned that this election is critical because there are many divergent opinions about where Cherry Creek should go and [the] different visions for it,” Allan said. “The board sets the vision for the district. And if the board members have an entirely different vision than that, then our historical dedication to excellence and expanding that excellence will change.”