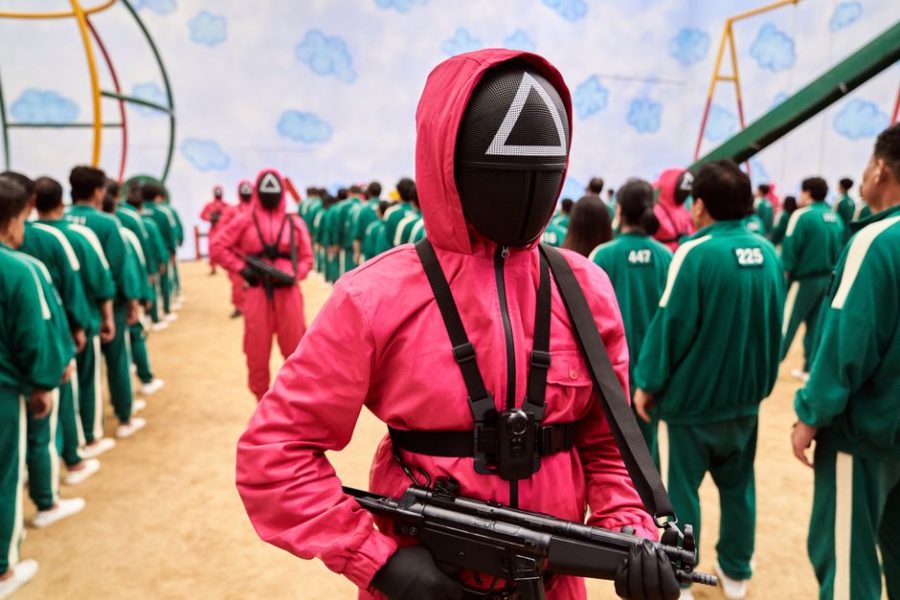 Netflix’s latest original TV show Squid Game has been named Netflix’s #1 most-watched in over 90 countries around the world in just 2 weeks.

The show is titled after a child’s playground game in Korea. The show changes innocent games into bloody, violent competitions. It is offered to those who need money to pay off debt due to everything from gambling, addiction, or immigrating.

The main character, Seong Gi-hun (Player 456), played by Lee Jung-jae, has an awful life. He is poor, struggling to pay his debt and provide for his daughter while fighting his gambling addiction.

The plot begins when Gi-Hun receives an invitation to join a game competition. He thinks it’s a simple tournament, but it turns out to be multiple rounds of deadly games where survival is not guaranteed. If you win this cruel game you will receive 45.6 billion won, or about $38.4 million in USD. Those behind the games are a secret organization that stalks people in their daily lives, until one day they are approached and invited to this merciless game.

Sophia Noahchi: I have not been interested in watching international shows due to cliché storylines such as a rich man falling in love with a poor girl and later living a “happy” life together. There are so many shows across the world that have used this storyline and now it’s just boring to watch those shows with that plot. Squid Game has changed my mind completely about the stereotypical K- drama.

Laila Seddiki: I think Squid Game is nice because it draws the audience in to keep watching with the way it differentiates itself from other shows in the same genre.

SN: I couldn’t stop watching the show because it kept me on my toes with how difficult life is for these players who play this inhumane game just to strive for a better life and having to lose their loved ones along the way.

Many parts left me teary-eyed, like when Gi-hun had to come back to his childhood best friend’s mom after winning without his best friend. At the last half hour of the final episode, Gi-hun leaves a suitcase filled with cash and gives it to his friend’s mom with a sticky note saying, “the money I own your son,” I couldn’t hold back my tears.

Another despairing event that took place was when a player had to compete with his wife in a game of marbles, in which the loser would be eliminated. The winner was the husband who, like any sane human, was filled with sadness and regret. Having to kill someone, especially a loved one, is the worst thing someone can experience. It’s terrible that someone would have to live with regret and shame that they killed another human being whom they loved and cared for. This moment lasted less than eight seconds of an episode but left a long-term melancholy.

LS: When I had those heart-to-heart moments, I had a lot of sympathy for the old man and how Gi-hun felt sorry for the old man. No one chose him as a partner because he was so frail. At first, he didn’t pick him to be his partner for that reason; he shortly realized that he was playing a game of chance. As the marble game begins, Gi-hun starts to lose and he starts crying because he doesn’t want to die. Gi-hun knew the only way he was going to win was if he cheated.

SN: The show’s main theme was on whether or not the players would be blinded by money coming from such a difficult background and still have sympathy for others, even while competing against them for their lives. Unlike Gi-hun, who remained caring, other players started friendly but soon became blinded by the money, like his childhood best friend.

It shocked me during the last 15 minutes of the last episode when it was revealed that the old man, who Player 456 assisted, was a multi-billionaire behind the game. It never crossed my mind that a participant could have been the creator of this cruel game?

LS: At first I hadn’t even thought of it. When I took a step back and looked at it from a different perspective it was clear. The old man saw no point in life. Imagine putting them in a game to fight to the death to get money for whatever reason they might have just so that they’re able to have a fair chance at a good life. Overall I know that the old man was right about life; the game of “life” wasn’t made for everyone but when you’re put in an environment where you don’t have disadvantages or advantages you can see the old man’s perspective.

SN: Definitely, the old man’s view on having his money was that it was comforting to have but you no longer enjoy things and that is why he created the game to both satisfy rich people who bet on players while giving participants a chance to become wealthy and not deal with their issues. I believe he wanted to, either way, teach both parties that even though you have the money you won’t be happy. A poor person or a person struggling with different situations as a wealthy person will, either way, suffer differently. I did not believe that Gi-hun’s argument on people being sympathetic to each other still exists while the old man argued that people only care for their well-being and can care less about others.

LS: I don’t believe people can be sympathetic. I don’t think people care that much about someone else that isn’t them. I agree with the old man that no one cares about anyone but themselves.

SN: I agree with you, but that sadly happens because when people are nice they are steep on like a doormat and used. It’s great to be sympathetic, but people will take that as a weakness and take advantage. I am not saying a sympathetic person is a coward or a loser, the world is a cruel and dark place and turns good people evil. Squid Game did not sugarcoat anything, that is one of the reasons why I enjoyed watching it. It’s truly a show based on reality.

Squid Game is definitely a show to watch in your lifetime. Nothing we have seen or heard of is comparable to Squid Game: the plot; theme; acting is something we have never seen before.