College warning flags: how the pandemic will permanently change the college application process 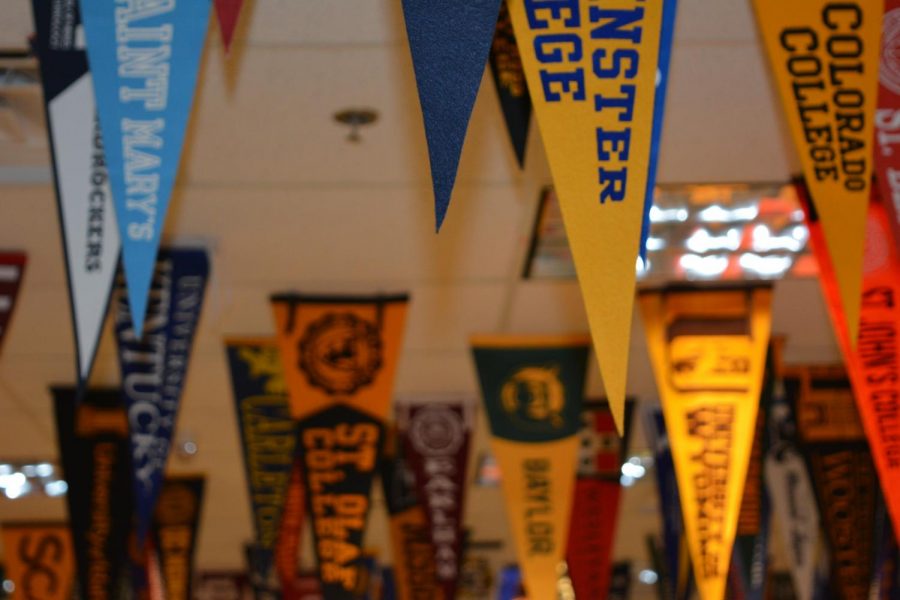 The graduating class of 2021 confronted many changes during their college application process this year that the pandemic directly created. But many of these changes, whether positive or negative, could stay to influence future graduating classes for years to come.

According to counselor and postgrad coordinator Craig Wittgrove, one of the positive changes the pandemic produced that is likely to stay permanent is the switch to optional submissions of standardized test scores.

“Colleges are accepting at least half their class test optional, and that’s a pretty big deal, especially for it being the first time,” Wittgrove said. “So [the pandemic] did actually open some doors that people didn’t expect.”

For seniors like Kaia Schiff, this test optional trend provided a source of comfort this year during already “erratic schedules.”
“It was a stress reliever,” Schiff said. “But it didn’t affect me too much.”

However, some seniors expressed many challenges they faced from this adjustment. For senior Leah Abrahamsson, the process only seemed to add more complications because she felt her entire high school career was built around the importance of achieving good test scores.

“[Test optional] actually confused me more because I wasn’t really sure what the right answer was,” Abrahamsson said.
“I’ve been preparing and taking these tests for so long, and now you’re telling me you don’t really need them? I kind of was like, that’s the pointless part of the application.”

And for some juniors already preparing for the application process like Devin O’Connor, the test optional trend has made the process seem more daunting and nerve-wracking.

“I think to have [standardized testing] removed is essentially gutting a big part of who [students] are and what they have to show for themselves and their academic careers,” O’Connor said.

For the UCs (Universities of California), half of the institutions are offering test optional while the other half are not considering the option at all. And for colleges like the University of Florida that did not offer test optional to students, application pools went down by 46 percent.

For students applying to colleges, many have taken these details into consideration.

Many students have also been taking into account the fact that there are more opportunities to apply to selective schools.
At Creek alone, there has been a major shift in these applications, with about a 14 percent increase to selective colleges.

Another major disruption: the pandemic will force many public colleges to consider is tuition.

“That’s the other part that’s going to change. I think we’re going to start seeing tuition go down,” Wittgrove said.
Many colleges are already facing budget cuts because fewer students have applied. Nationally, there has been a 14% decline in applications to four-year colleges, so many universities will have to determine where money will be redistributed.

For example, CU Boulder had 1,000 fewer students apply this year, so it will take three to five years to make up for the loss in tuition. Wittgrove believes many public colleges all over the country will also be forced to make similar “tough decisions.” Already, this year’s graduating class is witnessing universities struggle with these cutbacks as many colleges are having to release admission decisions later and later.

“A lot of colleges have been gutted, so where they make cuts first is an admissions office because it’s not a direct impact on students,” Mr. Wittgrove said.

And this delay hasn’t gone unnoticed by students.
“The more I think about it, we are at a disadvantage because the same things we’re feeling, burnout and exhaustion, is what these admissions [officers] are feeling too, almost on a heightened level work wise,” Abrahamsson said. “I feel like we kind of have the short end of the stick, and there’s definitely a disadvantage this year for us being reviewed fairly.”

For now, many students in the next graduating class are holding onto the hope that school will return normally next year and provide a more even playing field during their college application process.

But for the seniors graduating in June, many have realized that the pandemic forced their high school experience to end sooner than they expected.

“I haven’t really gotten to say goodbye to my high school. It’s this really weird dichotomy of moving on but feeling stuck in last March; that was our last really normal week of school,” Abrahamsson said. “Overall, the process just felt really surreal.”