Q&A with Principal Silva about the COVID-19 vaccine 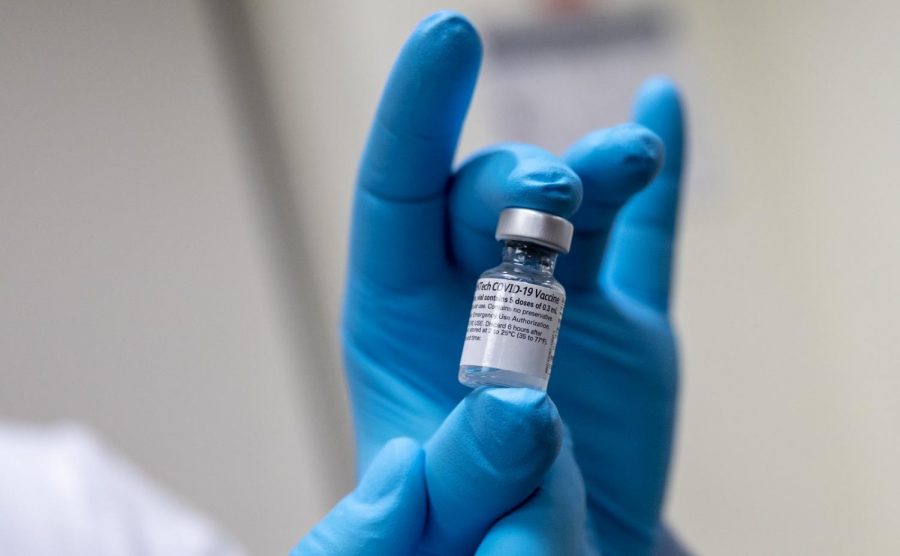 Principal Silva is hopeful that the COVID-19 vaccine will help school return to normal. "I think that it should make us safer, even if not everybody takes it," Silva said. "And I think if you're a person who did have some anxiety [about going to school] and you're comfortable taking it, hopefully that would wipe away some of that anxiety because you feel like you have a safeguard in place."

The COVID-19 vaccine will soon become available to teachers in Colorado. We talked to Principal Silva about how the vaccine will affect students, teachers, and staff at Creek.

What do you think about the vaccine?

I think that it can help us get back to doing things normally, not just in a school setting but also in the community as well. In terms of the science side, that’s certainly not my expertise, but I’ll trust the people who are scientists to say that it is safe and appropriate. And then once they’ve deemed that, which it sounds like they have, then I see it as a way for us to return to some normalcy.

Are you getting the vaccine?

When it becomes my turn, yes. I don’t know exactly when that will be, but when it is my time, then yes I would do that.

Why are you getting the vaccine?

I’ve been one who has had other vaccines, whether it is the flu shot or other types of vaccination. I tend to trust scientists and medical professionals and if it’s been vetted, then I’ll trust it and I’ll do it.

Do you think that people will feel safer coming into school once they’ve gotten the vaccine?

Hopefully. I know that not all people will want to take it, and that’s certainly a decision that we respect. But I think that it should make us safer, even if not everybody takes it. And I think if you’re a person who did have some anxiety [about going to school] and you’re comfortable taking it, hopefully that would wipe away some of that anxiety because you feel like you have a safeguard in place.

Are teachers required to get the vaccine?

Eventually they will get an opportunity to, but they’re not required to get the vaccine. I imagine that we will definitely have people who want to get the vaccine, and I bet we’ll also have some who will refuse to get the vaccine as well, but we won’t get that information. So I think what the district has done more is just make sure that it’s available to our teachers and they know how to access it, if there’s somebody who’s comfortable doing it.

Do you know what the plan will be for distributing the vaccine?

It’s changed and really we’re under the mercy of the state. Doctor Siegfried can come up with a plan, but it does have to be in coordination with what the governor wants and also what the health departments are able to do, and medical providers. We’ve seen that there has been some information that has changed. Initially, we educators weren’t a part of the first group and then we were, and now we’re not. And so there have been changes and I think that that’s difficult, because those are things that we can’t control, but they certainly do impact us. My hope is that we’re all able to access it as quickly as possible. There are people here who have already had the first round. They’ve already gotten their invitation and they acted on that. I don’t know exactly when the end will be, in other words, when everybody will have gotten the invitation, because the information continues to change.

Do you know why there was an adjustment in the plan for teachers to get vaccinated?

I don’t know if that was the state worrying that they wouldn’t be able to fulfill what they were saying they could do. It seems like that was the case. To me, they said that they would be able to meet the needs of these certain groups, and then maybe the governor started to get some information that made him feel that he needed to make an adjustment to the plan because it wasn’t realistic.

How do you think the vaccine will affect students going back to school full time in-person?

I think once everybody has had the opportunity to get it, then it would seem that we can return to more normal activities. I don’t know if that means that we’re here five days a week with everybody right away, but it would seem like that would happen sometime after everybody has had the opportunity to get it, based on what we know today. So of course, things can change, but based on what we know today, it would seem that once everybody has access to it, then being able to return to normal activity sometime soon after seems realistic to me. But I wouldn’t be the one who would make that decision – that would be our superintendent in coordination with local health departments. The five days a week with everybody here is one thing, but then the next question would be, what does that mean for other activities? Does that mean that we can have extracurriculars with an audience? We would get all that guidance from district leadership. But if we have students here five days a week, all of them, it would seem logical that we would also be able to do some of those other things like have a choir concert or have a track meet with fans there. Of course there’s also things like prom and graduation.

Will you clarify what you said during the morning announcements about Creek potentially being able to have in-person graduation and prom?

What I was wanting to say is that we all want to return to normal, so that five days a week with all students, we want to be able to have a prom, we want to be able to have graduation. But there are things that have to happen before we can get there, and I think the vaccination is a big one of those things. We need to just continue to do our part to make sure that we stay healthy here. The wearing of masks, not just when you’re here, but also when you’re off campus and it’s appropriate to wear one, and then the washing of hands well and gathering responsibly, just all those things within our control. The vaccination, in terms of when, that’s not in our control, but all those other parts are. And so yes that is the goal that we’d be able to do all of those things.

Do you think it’s a possibility for Creek students to return to full in-person next year?

If vaccines become available to students, will the school supply students with the vaccine?

The plan for teachers to get vaccinated got pushed back, but we still returned to hybrid learning. Why did we return without the teachers getting vaccinated first?

When Dr. Siegfried sent out communication, I believe it was last week, he did indicate that [teachers not getting vaccinated] was a factor, but it wasn’t the only factor. I think he based his decision on some other data points, such as the number of positive cases there are per 100,000, so that’s what I read in his communication that yes it is part of it, but it wasn’t the only factor that he would consider.

What is the overall mood that you are getting from teachers about being back at school?

I think they’re excited. I don’t want to say 100%, but I would say the majority are excited to be back, or actually I should probably say all of them look forward to being with students. There probably aren’t any that don’t want that part, but the apprehension exists with some because they’re just concerned about safety, and some more than others for sure. I do think that once the vaccinations are available to them, then that would be helpful.

Principal Silva added that, “I learn information in a similar way as you guys do, or staff does, in communication that comes out. There are times when I will get some advanced notification, but generally it’s not too big. So, sometimes I know exactly what you guys know when you know it.”