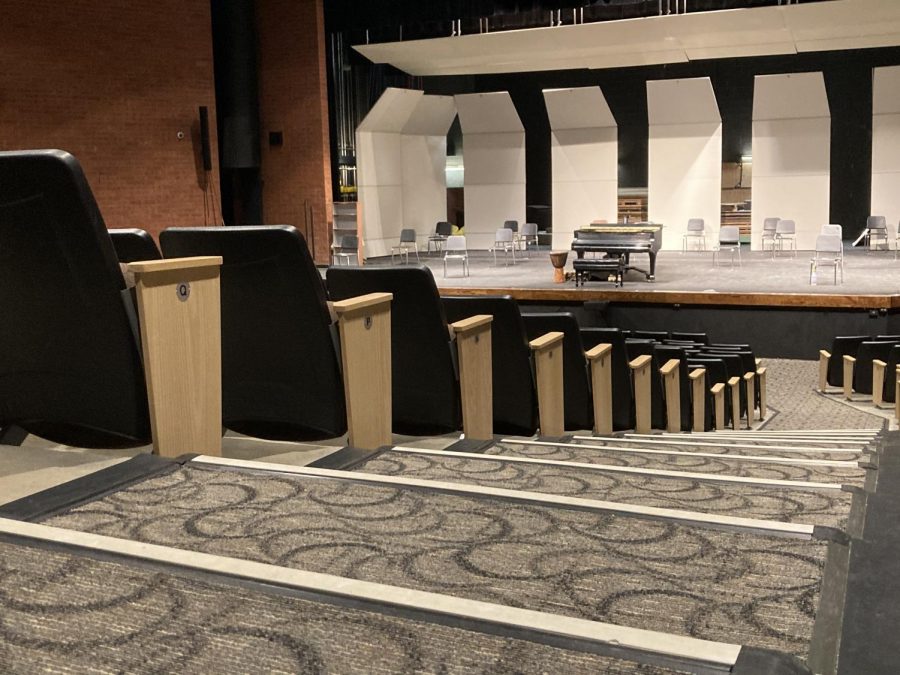 EMPTY STAGE: the theater will remain empty for the remainder of the semester as the radio show will be recorded and listened to remotely. "We wanted to keep making theater," said theater president Jen Failinger. "It's such a big part of our lives, and we knew we had to find some way to do art."

For many Creek clubs , finding ways to meet and continue with relative normalcy has been a challenge, but theater has found just the right way to make this year count.

Towards the end of the summer, theater director Alex Burkart decided that rather than its usual fall play, the Creek theater program would be producing and performing a radio show.

“Radio dramas cater well to the present COVID-19 world,” Burkart said. “Staging can be done with relative distancing; they are also easy to share digitally, as its origin audience listened from distances via radio-waves.”

The show is called Vintage Hitchcock, and it is a combination of three murder-suspense thrillers. The shows consists of The Lodger, a love story that quickly spirals into a suspenseful murder mystery; Sabotage, revolving around the multiple different terrorist attacks and bombings at the hands of the tedious saboteurs; and The 39 Steps, an international spy ring story.

“The world of Hitchcock also allows us to focus on the suspense genre, which we have not recently explored here at Creek,” Burkart said. “The radio play script itself leans more into melodrama, but it’s fun to resurrect the classic and thrilling work of Hitchcock.”

The show will be performed twice in late November, and will run for about an hour and a half.

COVID restrictions and cohorted separation meant that changes were necessary to not only how theater performs, but also how it prepares. Rehearsals are by cohort, meaning that the final performance will be a combination of several smaller groups.

And, instead of the classic audition style, students were asked to audition virtually, relying only on their voices to see if they will make the cut.

“I’ve been in theatre for the past 3 years at Creek.” junior Alex Mitchell said. “What we’re really doing is getting creative and improvising in the ways that we have fun and make art; no matter what challenges we face.”

For the students, this situation has presented a new set of challenges, from finding ways to stay connected to developing friendships with newer theater members.

“It’s been more difficult than in the past to foster community, especially with our limitations,” said theater president Jen Failinger. “Our incoming member amount has been lower than in the past.”

The split between the cohorts has been especially difficult, says Burkart. “The biggest challenge is missing the students so much,” he said. “In theater we love being able to see each other and interact with one another every day.”

Despite this, the members say that the sense of community is still apparent in theater. “Despite not seeing the people that I do in theatre anymore, we’re all just trying to adapt and grow together which i think is what makes us even more connected and allows us to grow together,” Mitchell said.

“We are all so close that we still feel super connected and like a community with the people we have gained,” Failinger said.

Sophomore internal spirit officer Hayden Noe agreed. “I think that communities have to come together in times of crisis,” he said. “I truly believe that Cherry Creek Theatre has made the best of these horrible times we are in.”