Living with a working mom 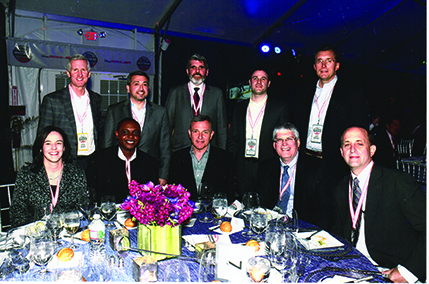 BOSS MOM: Guess which person my mom is at this business dinner? Until I grew up, I didn’t realize that it was so unusual to have a woman in business, let alone function as the family breadwinner.

As a kid, I didn’t know about sexism or gender inequality. People were people, and everything was normal.

My family was unusual, my mom worked while my dad stayed home and took care of me and later my brother. Who was I to know that they were out of the ordinary?

As a guy, having my father home all the time was awesome. We talked and watched sports. I had a role model that played golf and skied during the day and was a father at night.

Kid-me thought that was the best life; I even would say my dream job was to be a stay-at-home father.

But what I didn’t appreciate enough was that my mom was on the verge of history.

According to the U.S. Department of Labor, only 11 percent of households with children under 18 had mothers as the primary earner in 1960. Today, that number has risen to 40 percent.

My mom was part of that growth of women leading the family workload. Though, there was an unseen effect of these trailblazers’ legacies.

She was always the smartest person in my family, the one up late at night helping me do my math homework. I never questioned the intelligence of women because I learned from one.

I grew up having a dad able to teach me how to be a dude, but I equally had a mom teaching me how to succeed.

I didn’t question a woman’s chance at success any less than mine because one taught me.

Today large numbers of women are on the path to success with 34 percent of women getting bachelor’s degrees compared to only 26 percent of men according to the U.S. Department of Labor.

We are now seeing female presidential candidates with Hillary Clinton. According to NPR, one in two workers is a woman compared to one in three in 1972.

All the effort and progress that the women of today make, sets the future through the minds of their children that look up to them.

People growing up today with moms that are breadwinners will grow up without the mindset of gender discrimination. If women teach and lead us, then why will we ever question them?

There are still sexist old men in influential positions today, but as they retire and leave, men and women like me will fill their position.

Generation by generation, sexism will die and fade away. All it takes is an influential role model of a mom.

So thank you, Mom, for raising me to never question the ability of somone based on gender.